A History of Flat Track Racing 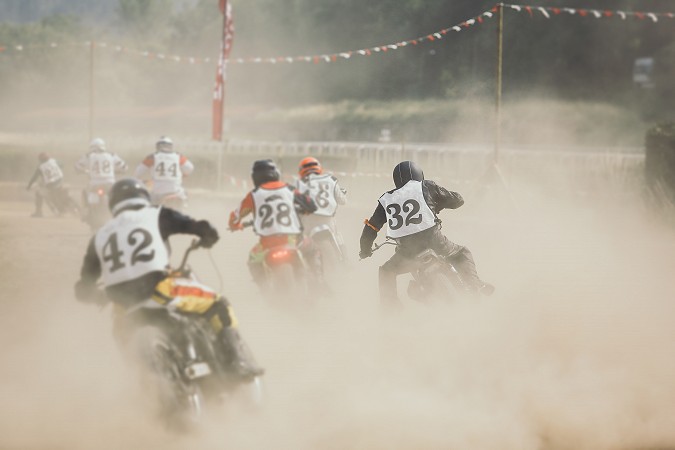 Flat track racing is an American motorsport that gained popularity shortly after the end of WWI. It was a craze during the 1920s and 1930s where it stole the majority of the audience that was already interested in horse racing. It was much similar to board track racing that has been covered extensively in our other entries. Flat track racing involved both automobiles and motorcycles, with the latter becoming the most popular, drawing in an audience of over 100,000 people. The sport consists of a series of events, all of which require racing at high speeds around an oval-shaped dirt track. Today, flat track racing is the most common motorsport in America, with hundreds of events being held each year.

Flat track motorcycle events have been unquestionably more popular. The ability to witness riders wrestling their bikes around a corner while slanting at almost a full 180 degrees around a dirt track while maintaining speeds of over 120mph is a truly dangerous and nail-biting spectacle. Flat track Motorcycle events are typically broken down into two main divisions; the first, known as singles, involves lightweight 450cc bikes typically built in the same fashion as motocross bikes. The more advanced category, commonly known as the twin’s division, consists of 750cc beasts that are more commonly built from the ground up specifically for dirt track events. Originally, flat-track racing was held on tracks built with wood, which proved extremely dangerous due to the lack of traction, causing multiple catastrophic accidents. Racing continued on these wooden trucks until the end of the second world war when organizers decided to use dirt tracks—most of which were initially horse racing tracks—as a safer alternative.

Not only did the American-born motorsport capture the hearts of many motorcycle and motorsport enthusiasts, the event quickly went on to become a battleground for American Motorcycle manufacturers like Indian and Harley Davidson, who began building bikes specifically for flat track events to take the crown as the best performance motorcycle manufacturer. British manufacturers like BSA, Triumph, and Norton joined in soon after, with Honda, Kawasaki, and Yamaha hot on their tails. Unfortunately, the sport was starting to lose its appeal towards the end of the 19th century. Primarily due to the introduction of Moto GP. The introduction of Moto GP and the global audience it brought made riders and manufacturers turn a blind eye towards dirt track racing and follow the fame and fortune offered at Grand Prix circuits. Nonetheless, the legacy of dirt track racing never died. The sport is slowly but surely regaining its popularity with an increasing number of vintage flat track racing fanatics entering the sport. The renewed enthusiasm in the sport has steadily increased, and viewing figures and sponsorships aiming to bring the sport back to life.

Suppose you’re interested in learning more about the beautiful machines that once dominated the sport. In that case, Throttlestop features a series of capable flat track race bikes such as the 2019 Indian FTR1200S, Rokon 350 Flat Tracker. One of the star attractions of the Throttlestop Museum is the Harley XR750. This legendary motorcycle is one of the most successful American flat track racers in history. The XR750 held the title for a staggering 17 years.

While in light of the ongoing pandemic, Throttlestop’s expanded museum is still closed, we hope to be able to offer our fans and friends the opportunity to get up close and personal with these glorious machines very soon. But until such a time arrives, viewers can browse through the hundreds of exhibits via the dedicated virtual museum.